Earlier this week we received an official visit from Her Royal Highness The Duchess of Cornwall, Royal Patron of the Friends of Westonbirt Arboretum.

The Duchess dropped by to take in the beautiful autumn colours and find out more about our work connecting people with trees to improve quality of life.

As Her Royal Highness walked to the entrance she was able to meet three of our longest-serving charity staff members, Kelly, Bev and Lorna.

The Duchess then walked along the arboretum’s STIHL Treetop Walkway, which opened in May 2016. Her Royal Highness was able to take a tour of the treetops on our 13m high and 300m long walkway through the canopy.

Next HRH met with Graham, our Community Shelter Development Officer, who gave her a preview of our plans for a new community shelter. Since its foundation in 2014, thanks to support from the National Heritage Lottery Fund, the programme has worked with 7,228 individuals from hard to reach audiences, empowering them to visit the arboretum and enjoy the physical and mental health benefits of spending time amongst trees.

We are now planning to build a new shelter that will provide a dedicated space for these groups during their visits to the arboretum. Thanks to the generous donations of members and trusts, the shelter has now been designed by participants of the programme, overseen by architect and broadcaster Piers Taylor. We are continuing to raise funds to be able to commence the construction of the shelter, which will also involve participants from the programme.

Curator Mark Ballard took HRH on a tour of Maple Loop, one of the best locations in the arboretum to take in our world-famous autumn colour show. While there, Mark showed her beautiful examples of the arboretum’s 297 maple cultivars, including the Acer ‘Katya’ that she planted here in 2006, so she was able to double check that we are taking good care of it!

Find out more about autumn at Westonbirt...

The Duchess then met Tree Team Supervisor, Rich Townsend, our longest serving member of staff, who has been at the arboretum since 1988.

Finally, The Duchess was taken to part of the arboretum’s ancient Silk Wood which contains ash trees infected with chalara ash dieback, a disease that is infecting ash trees across Europe and the UK, and is likely to cause significant damage to the UK’s ash population. Mark Ballard, Curator of Westonbirt Arboretum, explained to her how Forestry England are planning to remove many infected ash trees from the arboretum over the coming winter to make way for new plantings of various species, helping to create a resilient woodland for the future. 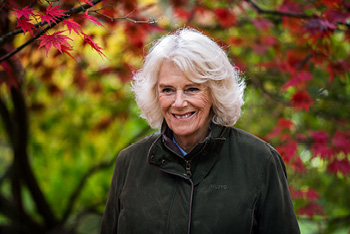