A walk into the unknown

We've always known that we have bats at Westonbirt - but we've never really gone out looking for them. 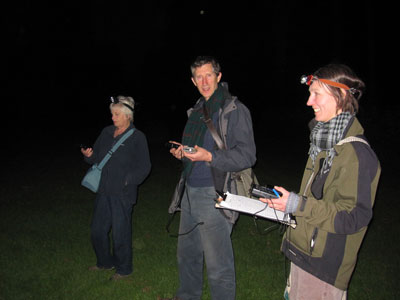 Previous bat walks have recorded pipistrelles and the odd Daubentons over the dewpond. Staff have found long-eared and horseshoe bats hanging in the tree team toilet. And a harp trap project last year recorded the rare Bechstein and also a whiskered bat. But this was really the sum total of our knowledge.

Was this all the species we had? Where did they fly in the arboretum? We didn't really have answers to these questions... but then looking for small quick flying mammals at night in woodland is a bit like needles in haystacks.

However, thanks to the combined efforts of Gloucestershire Bat Group (GBG) and Forestry Commission staff (who ensured GBG members didn't get lost) we now have a much better picture.

Assembling around 8.30pm last night seems a bit odd when you've only just left work - but all of us were quite excited as to what we might find (and truth be told a little nervous that we might not find much!)

The plan was to combine essential training for GBG trainees with the first bat survey transect of the arboretum using Anabat detectors. These remarkable gizmos record bats echo locating as they navigate in flight. Because different bat species echolocate at different frequencies and at different speeds it is possible for those in the know to identify the different species present by looking at their sonograms.

As dusk fell on a lovely warm day we split into three groups and headed out to our agreed survey areas - two covering Silk Wood and one in the Old Arboretum.

Armed with our detectors we were all soon hearing a variety of bat echo locating sounds including 'smacks', 'ticks' ,'clicks' and 'tocks' - and of course the occasional raspberry; indicating a feeding burst as the bat closed in on its prey.

My group were given a particularly fine show in Sand Earth where we were able to watch bats spinning round Douglas fir lined amphitheatres.

Meeting back at Keeper's Cottage, the GBG carefully reviewed the recorded sounds to identify the full list - and this was quite a revelation; as well as recording common pipistrelle, soprano pipistrelle and possibly a long-eared, the Anabats also detected serotine, noctule and two species of Myotis (the sonogram characteristics suggested Brandt's and whiskered, but as Sandi, our bat trainer explained, she couldn't be sure without a body). Finally another exciting possibility - a Leisler's bat; although again this couldn't be 100% certain from the sonogram - giving us possibly 4 new species on the night and taking the total bat species at Westonbirt to a possible 11 (out of a UK total of 18).

Whether or not it was or wasn't a Leisler's (or a Brandt's for that matter) really wasn't that important though - it was just exciting to get a glimpse of the nocturnal activities taking place on site that we had previously never really known about. And as David from the GBG said not knowing precisely provides the perfect excuse for some mist netting surveys.

Many thanks must go to the Gloucestershire Bat Group for coming out - we very much hope to continue our work together in future.

Photo: Members of the Gloucestershire Bat Group, by Miranda Winram

Find out more about the Gloucestershire Bat Group

More about wildlife and bio-diversity at Westonbirt 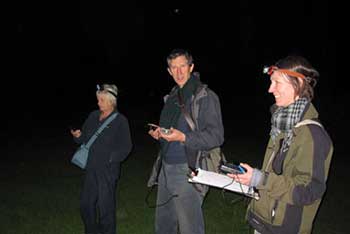