Ash dieback found - how can you help?

Since 2015, we have been monitoring Chalara dieback of ash in Westonbirt Arboretum. 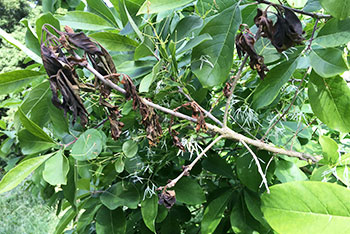 Chalara is a disease of ash trees caused by a fungus called Hymenoscyphus fraxineus. It causes leaf loss, crown dieback and bark lesions in affected trees. Find out more about this disease.

How is Westonbirt Aboretum helping?

We are working with Forest Research to conduct further tests on the nature of the infection. This includes monitoring other species in the Oleaceae family for susceptibility to the infection.

Westonbirt is playing a key role in research into the natural resistance or tolerance of many ash species. Since the infection was identified in ash trees on site in 2015, we have monitored how each taxa (species, sub-species, varieties and cultivars) reacts to the disease and this has informed on-going research into tolerant or resistant trees. Research has identified over 30 different ash species being grown in Westonbirt and other arboreta across Britain which will be used in trials to assess tolerance of these species to ash dieback.

How can you help?

We ask all visitors to all woodland to help limit the spread of disease by taking some simple biosecurity measures. These include not taking plant material away from arboreta or other woodland areas, brushing soil and plant material off their footwear, clothes, wheels and dogs etc. before they leave areas with infected trees, and washing these items at home before visiting another park, garden or woodland.

Biosecurity advice for your next visit