This month’s tree of the month is the Hollyberry cotoneaster, a species of shrub in the genus Cotoneaster within the rose family.

This large, deciduous shrub has green leaves through most of the year until autumn when they turn red and orange. So it’s the perfect season to seek out this species.

Naturally found in Western China, in the provinces of Hubei, Sichuan, Xizang and Yunnan, in woodland and shrub ranges between 900 to 3200 metres above sea level.

The Cotoneaster bullatus was introduced from China at the end of the 19th century, this cotoneaster has now naturalised in some places in the UK so it is easy to forget that these trees were new and exotic in their time.

During spring and early summer, small, pale pink flowers bloom while later in early autumn these develop into bright red berries. These large clusters of red berries are where this shrub gets its name.

This grey barked tree can reach heights of 4 metres over 10-20 years, and its spread can be equivalent to its height.

Fun fact: The top of this tree’s leaves are matte green while the underneath is much paler.

It was planted in several places along Pool Avenue by Sir George Holford and although only two specimens remain, they are still a fine sight when the berries are at their peak. 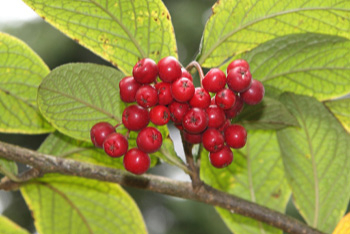