Among them are a number of members of the witch hazel family, the Hamamelidaceae. Whilst some are most renowned for their ornamental qualities at other times of the year, others come to the fore about now.

One of the best is Persian ironwood, Parrotia persica. It is one of our Signature Species: trees that have come to perform a particular role in the collection. Encountered throughout the arboretum, Persian ironwood forms part of the theme of ‘connection’, one of the three principles of the ‘picturesque’ style in which Westonbirt is planted. In autumn, the leaves of the Persian ironwood turn shades of purple, red and yellow. Our examples of the species are virtually all multi-stemmed and form what can be described as large shrubs, although of considerable dimensions. 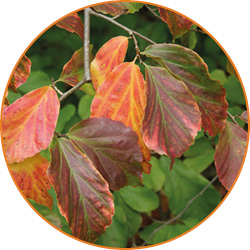 The common name of Persian ironwood is apt as the species is renowned for its solid wood.

Staying with shrubs, albeit far more diminutive, are our examples of Disanthus cercidifolius. Its leaves showing strong tones of pink and purple stand out, while its interesting, nut-like fruit may also be found on closer inspection. A Japanese native, it tends to colour a little earlier in the season, often from late September onwards, which is indeed the case with a number of plants from that part of the temperate world. 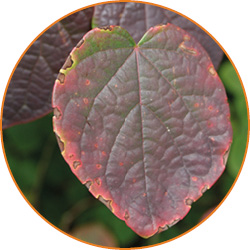 Recently, a new species of Disanthus has been described from North Vietnam, though some regard it as belonging to its own genus, having previously gone under the name of Uocodendron whartonii.

Switching themes just slightly, we have the sweet gums, belonging to the genus Liquidambar. Formerly part of the Hamamelidaceae, Liquidambar is now included in the Altingiaceae. The family was once considered to comprise three genera, Altingia, Liquidambar and Semiliquidambar, though recently all of these have been included within Liquidambar. This has increased the number of species within the genus by more than three times, from four to 15!

Three species are represented at Westonbirt, the most common being the North American sweet gum, Liquidambar styraciflua. Native to vast swathes of the eastern forests in the United States, it extends as far south as Honduras and El Salvador in Central America. 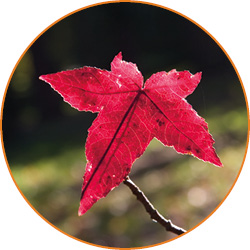 The tree grows wild in swampy areas in the United States, alongside other autumn favourites including swamp cypress (Taxodium distichum) and some of the hickories (Carya spp.).

As well as older plants dotted around the collection, we have recent plantings from seed collections made in West Virginia in 2006 and Georgia 2014, the latter from a tree of considerable stature, with a diameter of well over a metre! An example of the cultivar ‘Worplesdon’ is growing well in the Old Arboretum, notable for its predominantly strong autumncoloration. It also sets fruit, which is not so common for the species in this country, though our tree isn’t quite old enough yet! 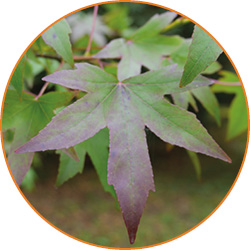 Sweet gums often begin to turn in August. Some trees are noted for their ‘traffic lightlike coloration’, as it develops from the top down.

Less lobed (and less common) is Liquidambar acalycina. This Chinese native was introduced to cultivation in 1980, from seed collected from the ‘Metasequoia region’ of Hubei, known for its fantastic plant diversity. Our plants are all young, but establishing very well. Though more known for the flush of their foliage in spring, they are still worthy at this time of year! 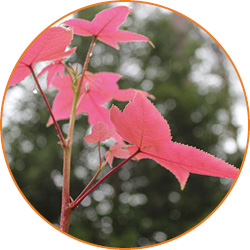 Rabbits are evidently keen on sweet gums. Our original tree, which was only young, was ring-barked in 2011. Swift to react, Penny Jones (Propagator) saved the day and took cuttings, from which our current trees grow.

The third of the three sweet gums here is the Oriental sweet gum, Liquidambar orientalis. Native to southwest Turkey and the Greek Island of Rhodes, it has recently been assessed for the IUCN Red List of Threatened Species as Endangered. Our plants were collected wild in Turkey, where threats include increased land clearance for agriculture. A less vigorous grower than either of the other two here, its smaller, five lobed leaves are tinted red in autumn. 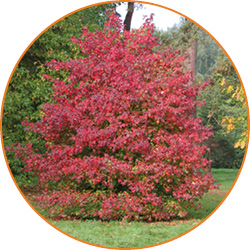 With maple (Acer) like leaves, sweet gums can be confused with the members of this genus but the arrangement of their foliage easily distinguishes them. In maples, leaves are arranged oppositely whereas in sweet gums, they are arranged alternately.

Don’t forget to print out the map here and take it with you. Discover the expert’s seasonal picks on your next visit! 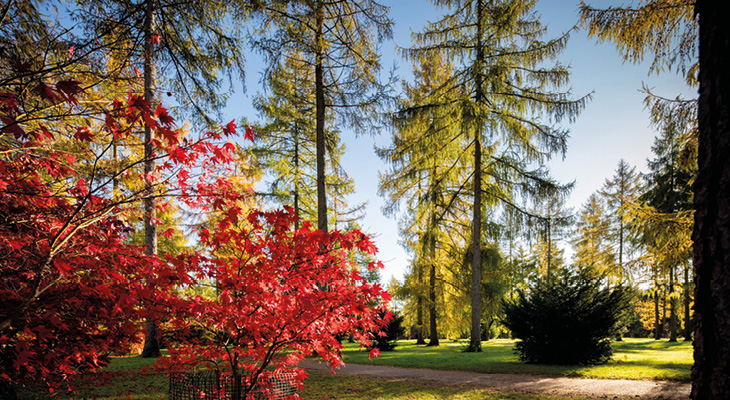