With a success rate of around 25% for seed collected from Redwoods in their native habitat of California, getting home-grown seed to germinate was never going to be an easy task. Keen to give it a go anyway in late autumn 2013 I gathered a handful of cones from the Old Arboretum and decided the best approach would be to replicate conditions found in the wild.

Looking to mimic a forest fire (Giant Redwoods in the wild are protected from fire by their thick insulating bark) I gathered a small pile of redwood twigs to which I set fire. I then placed several cones and some loose seed on a sheet of perforated tinfoil and held it over the fire for a couple of minutes, taking care not to turn the seed to charcoal!

The smoke, as well as heat from the fire, is thought to play a part in breaking seed dormancy. Both loose seed and seeds from the cones were collected and placed in a container in the fridge for a month, a process known as cold stratification; whereby winter conditions are replicated in order to break seed dormancy.

After the month had passed I met with Westonbirt’s propagator Penny Jones to pot up the seed and give them the best possible start in life. We filled two pots with seed compost and scattered the seed evenly on the surface. A fine covering of washed grit was added to help reduce moisture loss while letting the soil breathe. We watered both pots, moved them to the greenhouse and crossed our fingers in the hope that in a couple of months a few young Redwoods would appear.

A couple of months later only one seedling had germinated. One seedling from some two or three hundred seeds! During the following two years Penny expertly looked after the little tree, potting it up a few times and moving it from the greenhouse to the polytunnel to the shade house, where it slowly acclimatized to the weather outdoors and grew at an astonishing rate.

On Tuesday 12 January 2016 Ken Waite and I planted the young Redwood on the downs area near the Welcome Building. It has grown over two feet in two years; hopefully it will grow at the same rate for many years to come and become a welcoming figure for everyone visiting Westonbirt. 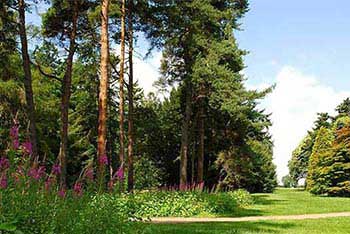