At Westonbirt, we are hoping to be part of conserving a newly discovered and described maple, Acer bizayedii from Mexico.

This critically endangered maple, Acer binzayedii, was newly described to science in 2017. This discovery was made by Yalma Vargas-Rodriguez from the University of Guadalajara in West Mexico. A few years before this, Yalma was examining Mexican populations of another critically endangered maple, Acer skutchii (Mexican sugar maple), which is closely related to Acer binzayedii. She had noticed some differences in two populations of what was assumed to be Mexican sugar maple. These two distinct populations can be distinguished by the different size and shape of parts of the flowers, seeds and seed wing veins and the morphology of bark. It is believed that these two species have evolved from the same ancestor, from which they split and evolved independently more than 5.5 million years ago.

There are only a few hundred trees of these species left in two separate locations which are less than 2 ha of remnant cloud forest (around 1,800m above sea level) and the numbers of mature trees are declining. The regeneration is limited by low genetic diversity, cattle grazing, logging and visitors.

Location where Acer bizayedii was discovered in Mexico.

We are in contact with Yalma (whose research forced the native habitat to become a new protected area as a State Park), thanks to the Maple Society. We are hoping to receive wild-collected seeds of Acer binzayedii from her this autumn along with detailed field notes and the correct permits in place and subject to relevant international plant material movement regulations and restrictions.

This will be a very exciting addition for our National Collection of Acer (maple) species and will be a great help for ex-situ safeguarding of this maple. Yalma is very keen to collaborate with us as there is no Acer binzayedii conservation outside Mexico. We are also in touch with Dan Crowley, from Botanic Gardens Conservation International as well as previous Westonbirt Dendrologist, who is focused on conservation of maple species.In the mountains of Jalisco State in West Mexico, Acer binzayedii reaches the considerable height of 20–30m, and its trunk can attain 60-90 cm in diameter. It is quite surprising to realise that it is used to much wetter conditions (mean annual precipitation is up to 1,300mm) than we will test the species here in England (Westonbirt benefits from up to 900 mm of rainfall per year). The mean annual temperature might be a challenge as well as compared to its native habitat (18.5 °C) it will have to adapt to a mean annual temperature in the Cotswold of 12 °C.

There is a lot of interest and beauty in pushing the plant's boundaries and limits as plant collectors and horticulturists have always done. The knowledge learned through this will help us to understand the needs of this species and how adaptable it is in varying conditions. This is important and will prove essential research to help all plant species in the changing and more challenging climate we can expect in the future.

We will share the observations with Yalma and other interested parties and of course keep you updated on further progress.

Photos and more information can be found on iNaturalist.

Read more articles on our blog... 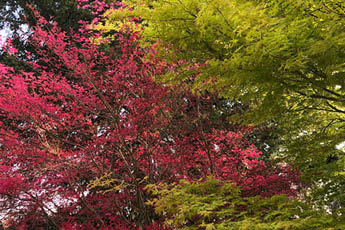