First in line for the new Westonbirt DVD!

I haven’t really caught on to 3D, or at least I hadn't until Steve and David from iworkfilms came to show us a preview of the DVD they have been filming over the past year.

I have to admit I was sceptical. How could a DVD even hope to capture the essence of what makes Westonbirt so special? After all it's not just a visual spectacle; you feel it, smell it, breathe it...

How wrong I was – I donned the 3D glasses (attractively over the top of my specs!) and sat back in the luxurious cinema of the Great Oak Hall upstairs office and was completely bowled over by the beauty of the filming.

The 3D was amazing. It really brought the images to life, almost touchable. At one point I even sat back as I thought a branch would poke me in the eye!

Not only had the film captured the essence of Westonbirt it also showed me unexpected places and gave me a real insight into what goes on behind the scenes in the arboretum - beyond my desk in Keepers Cottage.

Steve's love for the arboretum really shines through and his original music is a beautiful and haunting accompaniment to the cinematography – magical.

So, in one swoop I have gone from sceptic to first in line for my Christmas pre-order please! 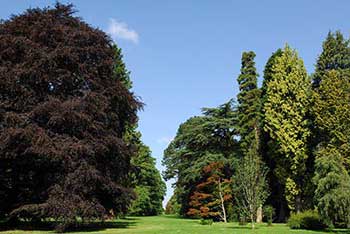