Moving up the stations

The weather at Westonbirt has been formally recorded since 1888 and the fascination with how it affects our trees still endures. Here, Sally Day, the Forestry Commission's Database and Records Officer for Westonbirt gives a brief history of meteorological measurement at the arboretum.

In 1879 Mr Chapman became head gardener at Westonbirt. He is seated centre in this picture and to his left is ‘Jack’ Mitchell who was his foreman.

Perhaps it was Mr Chapman who instigated keeping formal weather readings. The records in our archive start in 1888. These early records are lodged with the Gloucestershire Record Office for safe keeping.

Mr Mitchell became curator of the Arboretum in 1927. We have a number of his notebooks which contain comments about the weather and the effect on the plants.

The tradition was continued when the Forestry Commission took over the Arboretum in 1956. In 1976 Westonbirt became a Met Office Climate station. These sites manually record data including temperatures, rainfall, weather, sunshine, wind and cloud on a daily basis and report once a day. There are over 250 of these across the UK.

To the left of Tim is the first semi automatic station. The grey box contains the data logger which recorded temperature, soil temperature and wind speed at 5 minute intervals. It was powered by the solar panel which charged a battery housed in the green box. This system often failed in very cold weather resulting in a loss of data.

To the left of the logger out of the picture is the Stevenson screen. 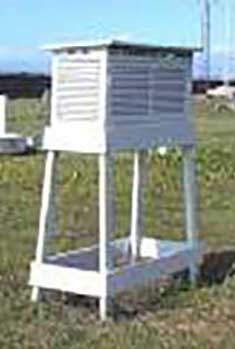 The Stevenson Screen or thermometer screen is a standard shelter (from rain, snow and high winds, but also leaves and animals) for meteorological instruments, particularly wet and dry bulb thermometers used to record humidity and air temperature.

It is kept 1.25m/4.1ft (UK standard) above the ground by legs to avoid strong temperature gradients at ground level, has louvred sides to encourage the free passage of air, and is painted white to reflect heat radiation, since what is measured is the temperature of the air in the shade, not of the sunshine.

To allow comparability from screen to screen every aspect of construction and exposure is specified by the World Meteorological Organization. For example, its doors opens towards the pole to minimize disturbance when reading in daylight. Double roof, walls and floor of white-painted wood provide screening, and extensive louvres maintain adequate ventilation on all but the stillest days. 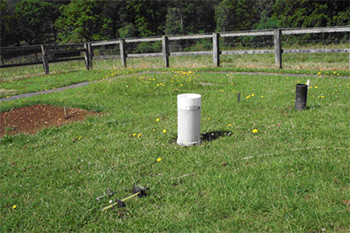 The yellow tube in the foreground is for measuring the grass temperature. The brass tube on the left of the picture is the rain collector and behind that you can just see a white object. This connects to a thermometer which is suspended underground. It is one of three measuring the temperature at soil depths of 10cm, 30cm and 100cm. The non grassed square is used to assess the state of the ground. E.g. wet, covered in snow, dry, dusty, cracked etc.

One of my first jobs when I started here was to dial into the data logger via a modem. I would then download the data and send it on the Met Office. The manual readings that Tim (and others) took were sent as well. By 2008 the station was in need of replacement and for a while we took all records manually. This task was shared primarily between me and Simon Toomer. It was a nice job on a fine day but not so much fun in stormy weather. Modern technology allowed me to log on to a web site and record this data.

The Met Office was keen to continue the dataset from Westonbirt. Following an agreement between them and the Arboretum they installed a new station. This is now a fully Automatic Weather station – these record data continually but log the data and report occasionally. There are 74 of these in the UK.

To look at the station is rather simplified. There is a new Stevenson Screen (on the right), but now it is plastic. The datalogger is powered by a small solar unit. If you look very hard you can find the sensor that records the grass temperature. Everything else is under ground. The only initial teething problem we had was due to a critter of some sort moving the grass sensor and chewing through the cable. Sharp eyes in Keepers Cottage spotted a stranger in the weather station a month or so ago. Stewart was here to check over the station and make sure that every thing was working correctly and up to specification.

Now the roles are reversed. The Met Office makes contact with the unit via a mobile phone connection and download the data. They then email it to me once a day. I do need to make sure the grass is cut (particularly round the sensor). This is usually done by a volunteer who works with Penny Jones, the propagator. This was aided recently by the cattle in the adjoining field. They somehow managed to open the gate and enjoy the greener grass on the inside.

On 13 December 2011 we seemed to have had several seasons in a day – sunshine, thunder, cloud, hail, heavy rain, back to sunshine and then thunder again. The next morning I received the data for the 24hrs from 9am on 13 December to 9am on 14 December – the wettest day of the year with 28.3mm of rainfall measured.

All in all it has been a strange year for weather. 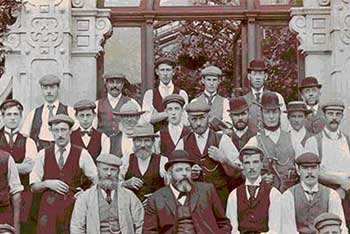