Return of the grazers

In mid-November, a group of Gloucester cattle will be taking up residence on the downland of Westonbirt Arboretum. They will be helping us to create and maintain diverse habitat for wildflowers and insects that make their home on the Downs.

So why is this grassland disappearing? Well, a large factor is that many herbaceous plant species found in these habitats , are susceptible to being outcompeted by more aggressive, tall rank species such as cocksfoot grass, docks and thistles.

Historically, these more competitive species have been kept in check and managed in Cotswolds grasslands by a combination of grazing, mowing, and burning. Burning is not an option at Westonbirt, and mowing is both labour intensive and does not produce as diverse a sward as grazing does. Grazing by livestock reduces the dominance of coarse, aggressive species (such as tall oat-grass and dock), which in turn allows less competitive species to establish and thrive. Through the action of their hooves, the animals open up the sward and soil to provide niches where seeds can germinate.

However, not all grazers are suitable for the Westonbirt downland. Sheep, for example, are highly selective grazers, preferring to eat flower-heads and buds of herbaceous plants rather than grass. Horses are also selective, and mainly eat finer species of grass, producing extensive ‘lawns’. Cattle are less selective than sheep or horses; they will eat grass and herbaceous plants equally, and are especially good at removing coarse grasses. The way cattle eat is important too: rather than nibbling with their teeth (as horses and sheep do), they pull clumps of vegetation from the ground with their tongues; this creates a more tussocky sward, and provides small areas of bare soil in which seeds can germinate.

There are two other important factors to consider; the number of animals used, and the timing and duration of grazing. Too few cattle, and any beneficial effects will be negligible; too many, and the area will soon become too poached up with large areas of bare soil, which are too disturbed to allow seedlings to establish. In order to ensure that we are getting the number just right, we’ll be closely monitoring the effects of the grazing via vegetation surveys. If needed, we can adjust the numbers and frequency of grazing. Timing-wise, it’s important to stop the grazing when the vegetation starts to flower, then get them back on the ground once most of the species have shed their seeds. Grazers should also be removed if there are signs of excessive ground disturbance during periods of prolonged wet weather.

As long as the cattle are with us, it is important for our visitors to remember that, whilst Gloucester cattle are mostly docile, you should not try to touch or pet them. Whilst dogs do not have to be on the lead near the area where the cattle will be grazing, please ensure that all dogs are kept well under control and to heel when near them.

Watch this space as we share updates on the benefits that the cattle bring to the nationally important habitat of the Westonbirt Downs! 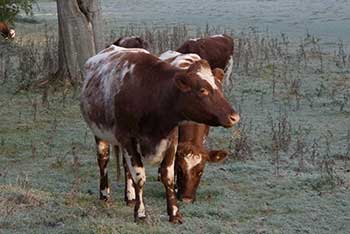