Westonbirt Arboretum’s Tree Team is working with The Duchy College to grow new plants from some of the collection’s oldest and rarest rhododendrons.

Last month Westonbirt welcomed a special delivery of 19 young rhododendrons, from four different taxa, ‘micro-propagated’ and grown for the last four years at The Duchy College’s specialist facilities in Cornwall.

Micro-propagation is a method of vegetative plant production undertaken in laboratory-like, sterilised conditions using petri-dishes and Agar gel. Tiny cells taken from the rhododendrons’ flower buds one to three months before expected flowering were used to grow roots and shoots. One great advantage is that a vast number of plants can be raised from a single fragment of plant material.

The technique means that the team can grow new plants from rare hybrids introduced over a century ago by Westonbirt’s founder Robert Holford and his son, Sir George Holford. The Holfords used selective breeding and seeds collected by famous Victorian plant hunters to create the hybrid varieties, some of which are exclusive to Westonbirt’s collection.

The team at Westonbirt is used to creating and caring for young trees and shrubs at its propagation facilities. 1,511 specimens are housed in the glasshouses, polytunnels, shade house and standing down area at any one time and can remain there from two to five years before being planted out into the collection.

Usually, specimens are either grown from seed collected in the wild (such as on the recent collecting trips to the USA and South Korea), or from techniques such as air-layering. Air layering is when small areas of the branch are wrapped with moss and rooting hormones and sealed in black plastic, convincing the plant that it is underground. The roots are then left to grow on the plant until they are strong enough to be potted. Micro-propagation is a technique generally reserved for very old, more difficult, or less vigorously growing plants.

Westonbirt had its collection of rhododendrons professionally surveyed in 2007. Many were identified then as important Victorian hybrids, and so the programme of getting these rare plants propagated began.

"The rhododendrons we are reproducing are very exciting from an historical point of view; they represent one of the most significant periods of horticultural development at Westonbirt," said Penny Jones, Propagator.

The young rhododendrons will stay in Westonbirt’s propagation unit for around four years until they are ready to be planted out in the collection. 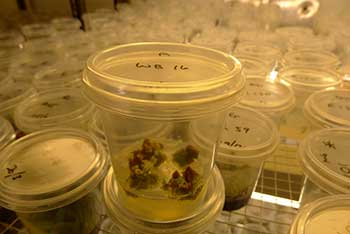