A mouse took a stroll through the deep dark wood The mouse saw….a group of teenagers unsure of where they stood

July saw the first Westonbirt Overnight Plant Hunter Challenge in which teams of young people from a range of organisations and youth clubs, navigated their way around a four mile course throughout the arboretum.

On the way, they undertook a number of timed tasks, based on plant hunters past and present, and were scored on teamwork, creativity and skill.

Nineteen young people, some with additional needs, took part in the challenge.

At 9pm, the first teams headed off into the trees and throughout the night they walked and walked, and then walked some more (particularly those teams who, at times, were unsure of which direction they were going in or where they were heading to).

They followed in the footsteps of William Lobb and collected sequoia seeds (although we had carelessly dropped ours into a ‘toxic swamp’); lit a fire using natural materials as David Douglas was required to do; made a herbarium as Joseph Banks did on-board the Endeavour; sorted viable seeds from diseased ones; created a new species of tree (using only newspapers) and made their own version of a Holford family portrait. 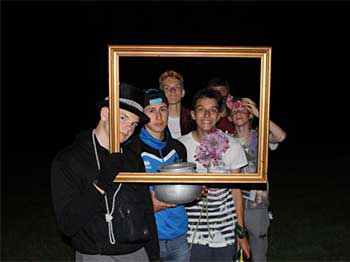 At 2.45 am the torch lights of the last team were spotted making their way across the Downs, where they were greeted with cheers, tea and toast before settling down for a night in the Great Oak Hall.

A few short hours later it was time for a barbeque breakfast and prize giving with Brimsham Green Youth Wing the overall winners.

A huge thank you to all the young people who took part and all the Westonbirt staff, volunteers and visiting group leaders who made the event possible. 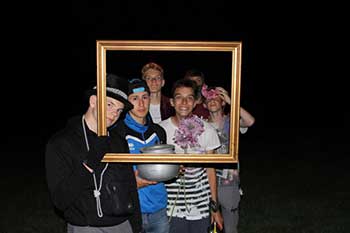