What did Wynter bring back from Chile?

The plant that was a very easy choice to become a tree of the month is our magnificent, multi-stemmed specimen of Drimys winteri, Winter’s bark.

This evergreen shrub, or in our case a tree, has a very attractive lower side to its foliage with its striking glaucous (covered with a white, waxy bloom layer, which you can wipe away with your fingers leaving a mark behind). This feature is mainly notable during windy weather when the glaucous lower surface of moving leaves is more visible in contrast with the rather dark green upper surface.

The flowers of Drimys winteri are white with a yellow centre.

The underside of the leaves have a white, waxy bloom layer known as glaucous.

Our Winter's bark specimen can be found close to Savill Glade.

The crushed leaves of Winter's bark are aromatic. Most people will rightfully be attracted to this tree by the profusion of fragrant ivory white flowers. According to the literature this tree should flower between May and June, however, this year’s flower spectacle appeared very early indeed. The flowers opened at the beginning of April and the plant has remained covered in the white avalanche of flowers all month and this will last for another 1-2 weeks. It is a very valuable plant for gardens as there are few more beautiful evergreens than Drimys winteri.

Our best specimen, which we are extremely proud of, is tree number 240069, close to Savill Glade. It has reached a height of around 13 metres but has the potential to grow up to 20 metres. We received this plant in 1960 from the Crown Estate of Windsor Great Park and we believe it was propagated from a specimen which used to grow there that was said to be the finest example in the British Isles.

Our Winter's bark specimen can be found close to Savill Glade.

The base of the Winter's bark tree.

This specimen has an abundance of white fragrant flowers.

This species comes from Chile and it first became known to science in 1578. When Captain Wynter returned in 1579 from an around the world expedition with Sir Francis Drake, he brought back the bark of this tree from the Straits of Magellan. He had found the crushed bark to be very useful to his ship’s crew, as it can be used as a pepper substitute as well as a stomach medicine. Due to its high vitamin C content, it was also used to prevent scurvy.

Have you read our recent blog about the conservation of a Mexican maple? Take a look here... 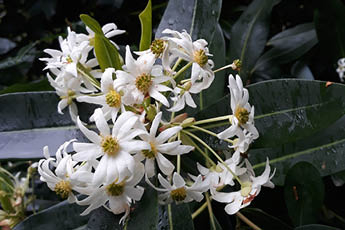