Deep in the mountains

This April I was thrilled to undertake field work in the Hoang Lien Mountains of north west Vietnam. This was as part of the ongoing Hoang Lien Son Conservation Initiative (HLSCI) to catalogue and conserve the fantastically diverse flora of the region.

The project is led by the Vietnam Institute for Ecology and Biological Resources (IEBR), University of British Columbia Botanical Garden (UBCBG) and Atlanta Botanical Garden (ABG). I was invited to assist particularly with the identification and documentation of the numerous maple (Acer) species, some better known than others, that are native to the region. 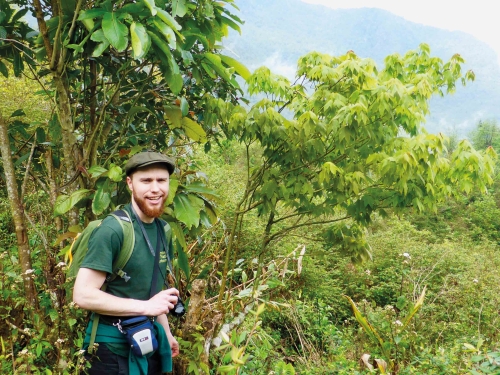 The Hoang Lien Mountains mark the south eastern most extension of the Himalayas. At their heart is the Hoang Lien National Park, which contains Indochina’s highest peak, Fan Xi Pan, reaching 3,143m above sea level. The park is home to nearly a quarter of Vietnam’s endemic species, with new plant species still being discovered and described including Magnolia sapaensis, which was only described scientifically in 2010.

It is named for the Sapa settlement, that is now a tourist centre in the north west, and was our expedition base. Disanthus ovatifolius, an exciting member of the witch hazel family, the Hamamelidaceae, that has been in cultivation since 2006 under the name Uocodendron whartonii, was formally described as recently as June this year. This is a hugely botanically rich and exciting region! 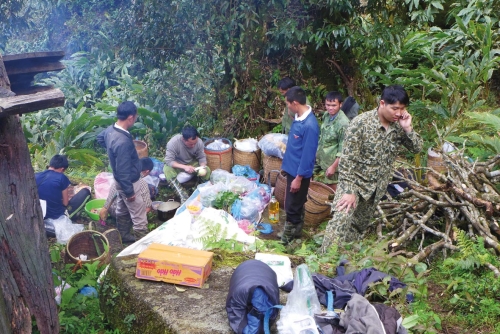 Over the course of our expedition, we were to collect herbarium specimens, take images and describe the plants we encountered, to build on the knowledge of the flora of the region. Our long-term project goals include the publication of a comprehensive flora of the region and sustainable forest management plans.

The field work was focused in two key areas. The first was the massif known as Five Fingers.

"This area has been little explored and we understand that we were the first group of western botanists to tackle the route we took on our four-day trek."

The second was Y Ty (pronounced ee-tee), a mountain to the northwest, five or so miles from the Yunnan border, where we spent a further three days exploring.

I was part of an extremely knowledgeable and experienced team. On Five Fingers, I was accompanied by Andy Hill, Douglas Justice (both UBC), Dan Hinkley (Heronswood, US), Nguyen Van Du, Bui Hong Quang along with Master’s students Trân Đúc Bình and Doan Hoang Son (All IEBR). For Y Ty we were joined by Scott McMahan (ABG), Donglin Zhang (University of Georgia) and Bleddyn Wynn-Jones (Crûg Farm Plants).

"We were escorted by a merry band of porters, who are, quite frankly, some of the most incredible people I have ever come across. They tackled challenging terrain with unbelievable ease, wearing little more than sandals to protect their feet."

What’s more, they managed this while carrying tents, food supplies and most of our belongings. By the time we rolled (almost literally) into the makeshift campsites in the evenings, the tents were always up and dinner almost ready.

The maples of Vietnam

The maples of Vietnam have been little documented. Around 20 are known, though details in floras are inconsistent and incomplete. Some are not recorded at all. It didn’t take us long to find one of these.

Acer sterculiaceum subsp. sterculiaceum, also known as the pungent maple, was one of the first maples we came across on our hike up Five Fingers. Its native distribution is recorded as being west from North West Yunnan, more than 600km away. Here we observed it growing with Campbell’s maple (Acer aff. campbellii) and the Chinese tulip tree (Liriodendron chinense) among many other incredible plants. 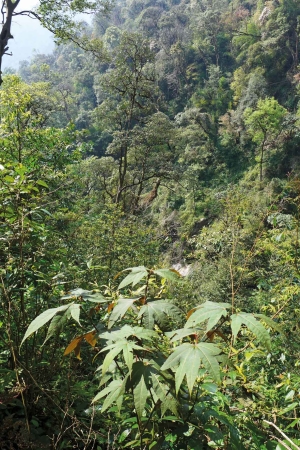 "Waking up to see specimens of the rare Rhoiptelea chiliantha, was amazing. There is only one plant of this species in cultivation and this is here at Westonbirt, so I was particularly happy that we were able to harvest some seed, albeit a touch early in the season. Still, a great start to the day. It wasn’t even eight o’clock!"

Our four days on Five Fingers somewhat blurred into one, with endless ups and downs on challenging terrain. Coming off the mountain on the fourth day brought about a feeling of huge satisfaction with the plants we had seen and the ground we had covered. We’d been tremendously fortunate with the weather, it rained only once on the first evening.

Following our successful first leg of the expedition, we returned happily to civilisation for a well-earned shower! Next was our excursion to Y Ty, where we camped for two nights amid the maples. Immediately adjacent to the campsite was an excellent specimen of the snake bark Acer sikkimense and all around were juvenile Campbell’s maple. What was particularly noticeable here, and to a lesser degree on Five Fingers, was the lack of old trees (particularly maples). Many had evidently been removed for cardamom production, leaving a distinct lack of seed sources. The area is in serious need of conservation.

In this vicinity also grew Magnolia foveolata some of which were in flower. If our one tree ever flowers as they do in the wild, then we’ll all be in for a real treat. Along with more Rhoiptelea chiliantha (and a second seed collection), we also encountered the unusual Dipentodon sinicus. Although a rarity in cultivation, it is not uncommon on Y Ty! Our time on Y Ty ended with one of the highlights of the trip. On our way up in the minibus I had spotted a large tree with big, pink inflorescences, and mentioned to Douglas that I had seen something rather unusual; sadly stopping had not been possible. However, on our way down Scott spotted this tree and this time we were able to stop and for a closer look.

"No one seemed to know what it was until it dawned on Douglas that it must be Bretschneidera sinensis; listed as Endangered under the IUCN Red List of Threatened Species, it truly is a species in need of help. Descriptions of the flowers state they are white to pink and boy, these were pink!"

It was a stunning sight and the only example we had seen anywhere on Y Ty. This great moment seeing the tree really brought home the importance of conserving species in the area.

Much knowledge was gleaned on the maples of the region and the opportunity to study these plants in the wild is a real privilege. We are certainly a few steps closer to understanding the maples of the Hoang Lien Mountains and while this expedition, like others, answered some important questions, it also presented plenty of new ones to answer.

My sincere thanks go to Arboretum Wespelaar, The Friends of Westonbirt Arboretum and The Maple Society for supporting my involvement in this expedition.

Your membership is helping to fund trips like this, to improve our understanding of natural environments and the protection of tree species worldwide. Thank you! 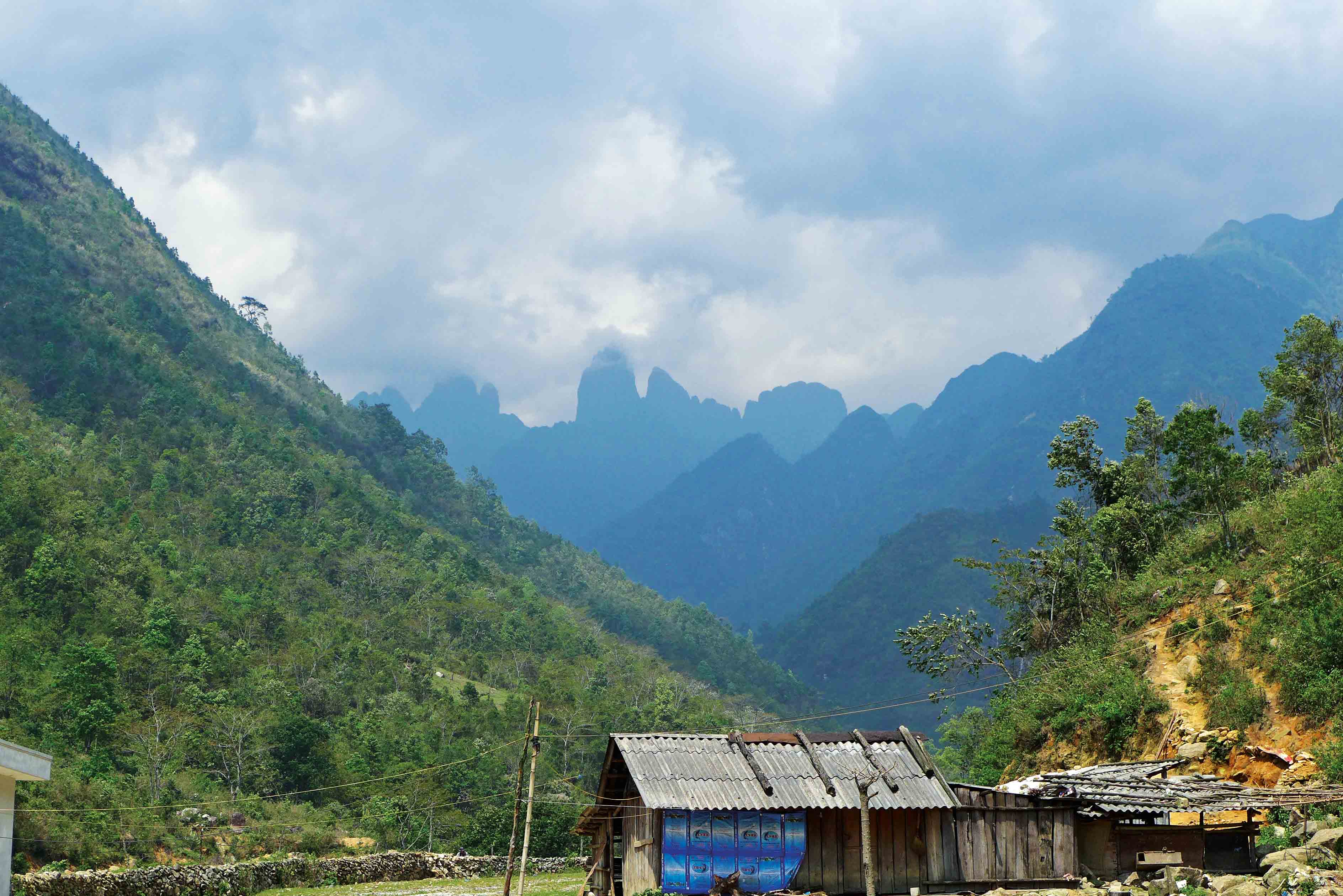