The Scots pine (Pinus sylvestris) was voted the national tree of Scotland in 2014 and is a member of the Pinaceae family, a conifer native to northern Europe.

It is one of only three native conifers and the only truly native pine in the UK, it can grow to 35m tall and live up to 700 years. 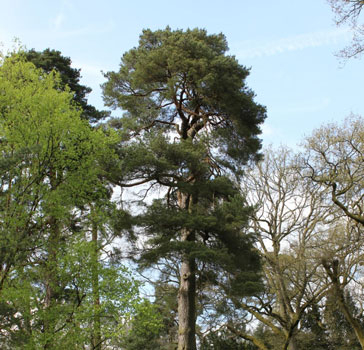 The bark of the Scots pine is a scaly reddish-brown. The evergreen needle leaves are present all year round, they grow in pairs on short side-shoots, appear blue-green in colour and twist slightly. Flowers of conifer trees are called ‘strobili’ which means small cones, like many pine species the Scots pine produces both male and female flowers. The male flower releases an abundance of pollen grains which are carried by the wind, and under the right conditions encounter the female flowers where pollination takes place. The flowers then begin to develop into cones, maturing the following season. The cones carry the seeds which ripen after two years, meaning that one tree can have many cones of different ages.

The Scots pine is widely distributed, growing in light, sandy soils in sunny spaces. It is widely for timber due to its high resin content, strength and tall, straight trunk. They are also found abundantly in the Caledonian pine forest in Scotland. This varied and special habitat is home to many rare species, such as Red squirrel, Scottish wildcat, Pine marten and Capercaillie (wood grouse). Scots pines in southern England are also the main caterpillar foodplant for the Pine hawk-moth.

Fun fact: The species was more commonly known as ‘Scots fir’ or ‘Scotch fir’ before the 18th century.

Starting in 1829, on turning 21, Robert Holford planted over 300 Scots pine when creating the structure of his arboretum. Plentiful and striking, the Scots pines around Savil Glade are particularly beautiful on a clear winter’s day. 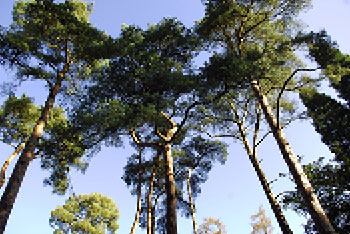