Have you visited the new bird viewing area?

The new bird viewing area, located in the Old Arboretum just off Circular Drive and near to Holly Gate, is now open to the public. The RSPB have been hosting activities and working with Westonbirt Arboretum’s visitors (and wildlife) to make the most of this fantastic new facility.

The workshop and wood sales volunteer team are a highly skilled group of volunteers who, once a brief had been agreed, began the construction of the new bird viewing area earlier this year. Here’s a closer look at how it all came together:

Initial design proposals were prepared which fitted in with other constructed elements of Westonbirt Arboretum. The design reflects the oak frame structures of the den building play in the Old Arboretum, the Great Oak Hall and the Silk Wood Barn.

The frame was made from 125mm by 125mm oak beams and 25mm larch boards to side elevations. The roof would be made from oak shingles of random widths, hanging on oak A-frames and larch purlins and battens. The design also had to let the building team manually move and lift the frame into position, and this determined the maximum length of the beams to be around 3.5m in length.

The basic design and budget was approved in early 2011, and initial milling of the oak butts was arranged with Alistair Williams for the first weekend in February.

With the timber relocated to the workshop area, material was selected for the initial components of floor and roof plates. These required an overall length of 6.6m, so three beams were scarf together using traditional framing joints to achieve the overall length. The scarf would normally use wooden pegs, but needed steel bolts to meet health and safety regulations.

The vertical posts were positioned in the floor plate and the roof plate was then located on the top of the posts. For this we used the standard mortice and tenon joint at each end of the post. All the joints were cut by hand using 50mm chisels and mallets, as through or blind joints depending on location.

Having determined the location of the new bird viewing area, the kit was assembled in early June. The assembly of the basic frame and the raising of the roof A-frame was completed in a weekend, with all volunteers working hard over the two days.

At this stage of the build a delay occurred due to a requirement for planning approval. This slowed things a bit and we were only able to fit wind braces over the next eight weeks.

Given planning approval, all volunteers were keen to complete the project within the September target date. The boarding of the side elevations and fitting of the window frames were completed and the roofing battens, shingles and ridge were fitted over the next few weeks. During this time we were joined by a number of new recruits to the team. 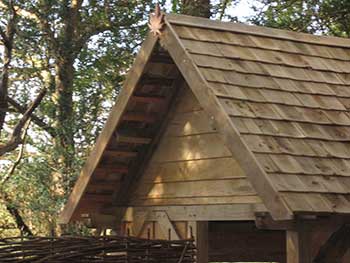 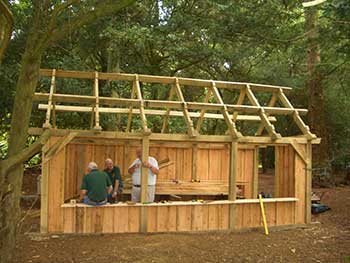 With the one way windows fitted, the facility was opened for public use from 1st October. Benches were installed, leaving access for mobility scooters to enter and exit.

Some photographers have commented on the problems of taking pictures of feeding birds through the glass. This is a problem with automatic focusing cameras which has been experienced previously. It is to be noted that access for cameras have been left in the side hurdles for the serious photographers.

We hope that visitors will see this project as one which enhances their Westonbirt experience, and that birds will appreciate the new source of food when winter arrives and insects, fruits and berries are in short supply.

My thanks go to all of the volunteers who have supported this project with their time and effort. We are now engaged on new projects, including additional play equipment for Silk Wood and some smaller projects for the Learning Centre and Family Events. In the New Year we hope that we will undertake some additional oak framing which will take the form of shelters in the arboretum.

Support one of our shelter appeals to make a huge difference to the community groups and coppice workers at Westonbirt. 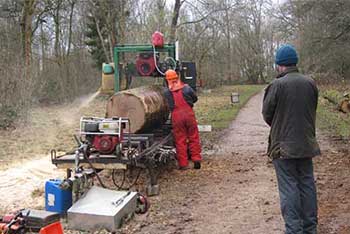