It’s wonderful that Westonbirt Arboretum is a place where 500,000 people come every year to escape the stresses and strains of everyday life.

As part of our Heritage Lottery Funded project we’ve successfully introduced a community programme, part of which enables us to provide some focused engagement with members of the community who are learning to live with a range of mental health conditions. Being from the community ourselves it should be no surprise that we, the staff who work here, also experience many of the same emotions and conditions as the people who visit us. Here, one of our number, Tomas shares his own journey with depression in the hope that his experience may help others…

I am 29 years old, male, and I am an Arborist at Westonbirt Arboretum. I have suffered from Depression since I was 13 years old. When I was 18 years old, without leaving a note or telling anyone where I was going I drove my car to a motorway bridge in the middle of the night and climbed over the railings. It was the thought of my parents’ grief that caused me not to let go. I had attempted suicide, and failed.

It’s sometimes very difficult to explain to someone who does not understand quite what depression is.

One of the reasons it is so difficult is that most people have a preconceived idea of what depression is. I would wager that you could probably remember a time in your life when you have described a particularly dreary Monday morning in winter as depressing. Or described yourself, or others as depressed during a period of sadness or frustration. In reality, Depression is a debilitating and potentially fatal illness. It is a startling fact that in 2014, 6122 people from the UK committed suicide, of this number around 75% were male. But most shocking of all, for males under the age of 45 - suicide is the most common cause of death. If you are reading this and you are a male under 45; you are the thing most likely to kill you. And it’s because we, as men aren’t talking about it. Arboriculture is one of those stereotypical ‘macho man’ industries and so, works as the perfect way of describing the problem, with us blokes that is, causing the dreadful statistics I mentioned earlier.

I just cannot imagine descending down from a 30m pine after a hard afternoon's slog. As a combination of sweat and dirt pours down my face. Packing up my climbing harness, and putting my chainsaw back in the truck whilst attempting to brush the sweat soaked sawdust from my arms and t-shirt. Before then turning to a colleague and saying,

“Last night I sat in my car, in a McDonalds car park and cried for the best part of four hours because I really don’t want to exist anymore. And I’m trying but I can’t find anywhere I want to be more than nowhere at all.”

I can’t imagine saying that because I don’t want anyone to think I am a ‘wimp’ or a ‘girl’. As well as that I don’t want to impose my weaknesses on them. In spite of knowing I am in the rare but lucky position to have a supportive and understanding team around me, I still struggle to overcome that age old stigma that a Man should be a Man. Brave. Unafraid. Strong. The societal expectation that I should be able to pull myself together and just get on with it. After all, isn’t it common knowledge that sitting down and chatting about your feelings is something that only Women do? Come on, Man up!

'Manning up', however does not help. It only aids to make things worse. It adds to the stigma. It reinforces the ideals that keep us quietly pretending to be ok. The reason why I am writing this is because I want to be able to be honest. The proof of how successful I will be in this endeavor will be if my name is included in the title. 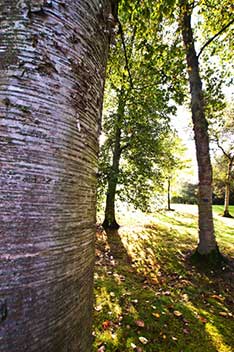 But, I should talk about trees. Aren’t they just amazing? Depending on your level of interest, trees can be seen as giant, complicated organisms or as just something beautiful to look at, or both. They’re capable of feats of engineering greater than anything man has ever created. For example, to achieve the remarkable efficiency of photosynthesis trees employ quantum superposition, a fundamental principle of quantum mechanics. Physics aside, they can be used practically. Tree lined roads reduce the likelihood of speeding. In urban areas they can increase property prices and an area's desirability so much so that new housing estates often name roads after trees to make up for the lack of them. They provide us with the oxygen we need to breath and to neatly tie us back into the theme of the article, they can help aid recovery from depression. There is a simplicity about trees that is quite wondrous. They are calming. If you happen to find yourself away from the bustle of your busy lives and find the time in spring to lie beneath a tree and look up through the branches as the sunlight works its way through the fresh leaves, then you are experiencing something the Japanese would call komorebi (木漏れ日). A word that has no direct translation into English.

During my younger years, I worked for a year in New Zealand and whilst I was there I spent a few days tramping in the Nothofagus forests of Fiordland. Tramping trails in New Zealand aren’t quite like our well-worn public footpaths here in the UK. They are barely visible at all, marked only by the occasional orange triangle. As I walked through these woods, I experienced a quietness like I had never before. Not that the woods were quiet, the wind in the leaves and the chatter of birds kept me company as well as the sound of the forest floor crunching under my boots. It was an internal quietness. My mind, stripped of the pressures of everyday life, was calm.

I don’t think I can explain fully how spending an hour or two up in the broad spreading canopy of a Beech, walking a quiet woodland trail or sitting between the buttress roots of an ancient oak can give me a peace when my depression takes hold, other than that it is a place of safety in which to breath.

Numerous organisations and charities take advantage of this phenomenon, using woodland skills and workshops to assist vulnerable people. At Westonbirt our excellent community outreach programme has helped hundreds of people suffering with one form or another of mental health disorder. 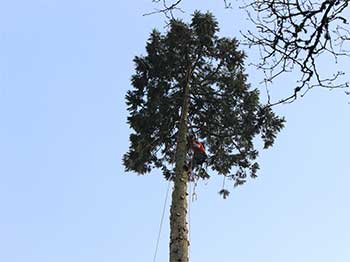 As I write this I consider myself very lucky to be alive. And even luckier still that I get to spend my days in one of the most beautiful settings imaginable. I find that even in my darkest moments that I can be proud of myself for contributing to the upkeep of somewhere that provides so many with so much positivity. I enjoy the idea that on a daily basis I am benefitting from the work and visions of people who died long before their vision grew into fruition. Because I know that when I am no longer around, people will walk amongst the trees of Westonbirt Arboretum and enjoy what I too helped to create. But if I get the chance, as an old man, to return to Westonbirt and wander the glades to a tree I planted as a lad and lie on my back to watch the summer sun dance through the leaves, maybe I will think that without me, this tree would not be here, but without the tree maybe I wouldn’t be either.

For information and mental health support you can visit mind.org.uk or you can call the Samaritans on 116 123. 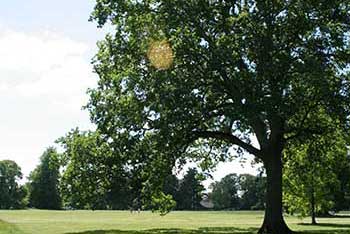